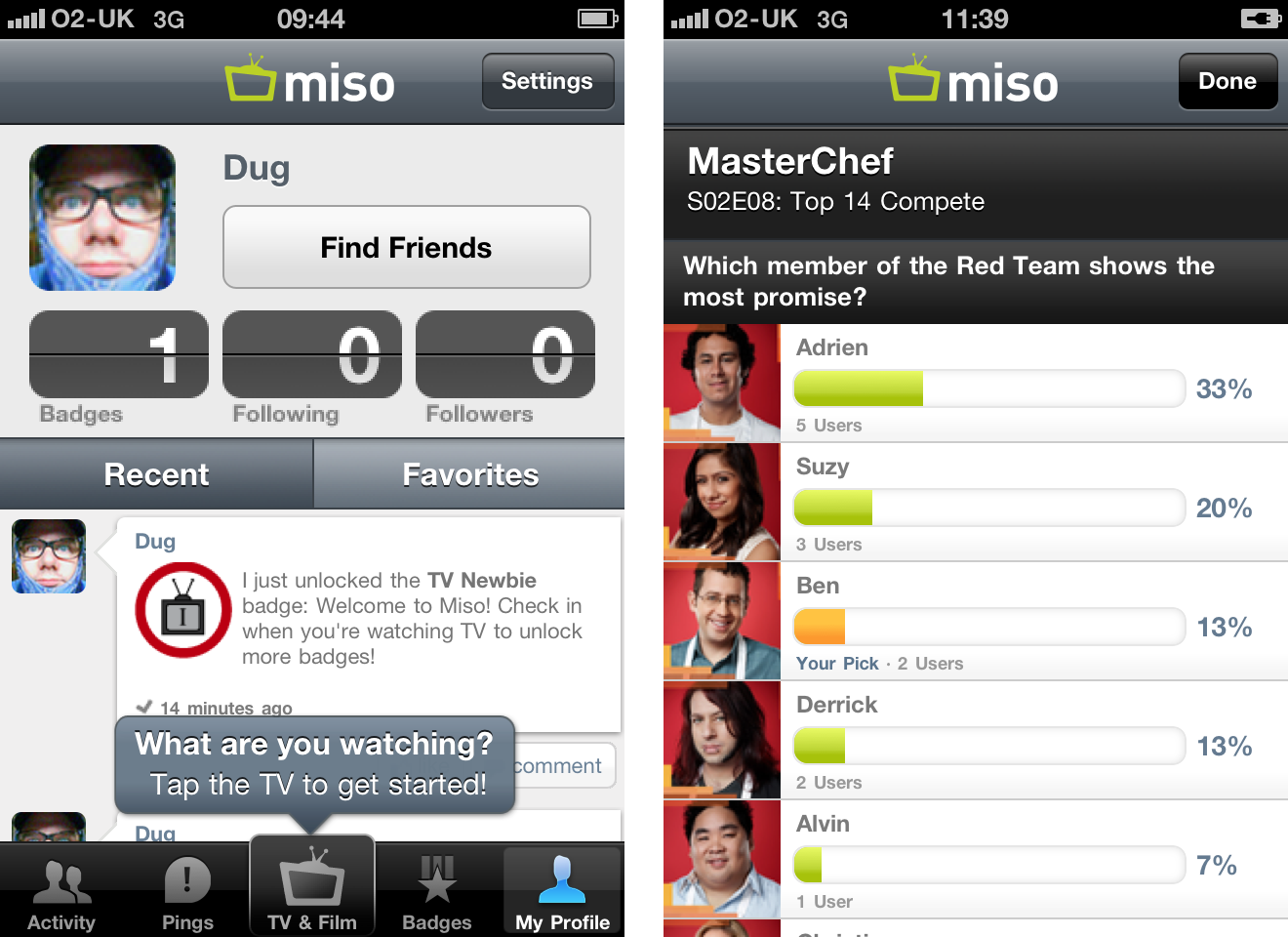 I worked on a project called “Fanbases” last year, a project to build a publishing hub that would allow brands to place themselves in the centre of relevant, fan-driven conversations.

At its core, the idea seemed a good one as there is a genuine energy in fan-generated content (just look at fanfic and slash for starters). So in the end, Fanbases never got off the ground but a host of new services are popping up to tap into the same drive to participate in the conversation around the film and television shows we love.

The TV-lover app space is getting very crowded with apps for most IPTV players like Netflix and Hulu as well as apps for networks and pc platform plugins but most of these apps focus on content delivery and asset management, not the raw thrill of loving Dr House and the hunger of wanting more more more. Two close competitors IntoNow and Miso in particular are tapping into just that. These services allow users to “check in” to content and then comment, rate and like around it.

Both the apps have really rich, deep iPhone interfaces. To be honest I can’t really call a winner on that front. For us European folk, the iTunes store has made the decision for us, as IntoNow is US-only. They’ve also made the decision to handle sign-up through the mobile device (or the UK website has the account creation filtered out) so no way to test the multichannel experience.

I’ve played with Miso and it works really well. It’s fully gamified, with levels, badges, groups, points and kudos all factored in. Creating a record for a new movie unlocks the ability to edit film and TV descriptions and this earned superuser access certainly felt like a proper reward for the time I had invested in the system.

As well as the usual check-in mechanics, Miso also hosts polls allowing users to vote on content detail. The example above comes from the US version of Masterchef and allows participants to vote for their favourite team member.

Will all of this catch on? Well, a good sign of potential success is when developers start making mashups with your service and Miso has just been mashed up with the Plex IPTV platform. That means LG television owners get Miso built-in and it means the whole XBMC community getting in on the fun. A sign of good things to come.

I do have one question I can’t seem to find an answer to. Thanks to the smartfone, Twitter now fits into people’s lives so unintrusively and so compellingly that tweeting while watching television has become huge. How huge? Wimbledon gets 30,000 tweets a week and most of the other top-ten shows are pulling more than 10,000 tweets per week (Source tvgenius.net).

So my question is this, who will win? A service that wraps microblogging interaction seamlessly around the customer’s own experiences or a service that creates a compelling social interaction in a silo?