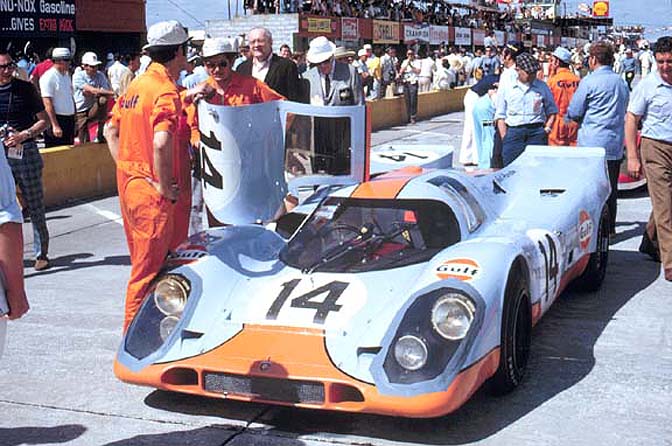 This from Jed, my Dad, who directed television commercials all his life, and who had the opportunity of being part of American advertising’s class of 1959, the folk who brought you Avis trying harder and Volkswagen thinking small. He moved to France with his young familly in 1968 to set up Television production for Young & Rubicam Paris and never looked back. He is now retired and lives with my mum in Budleigh-Salterton, which is in Devon which is a county in England…

The film clip (video?) is so damn small and so damn fast and shot from the wrong angle that you can’t see my handiwork on the right rear quarter. In the far off past I did films for Gulf Oil. TV Commercials at Daytona and at Sebring (The 24 hours at Sebring then). Gulf had sponsored the Fords earlier (Le Mans!) but were now backing Porsche in their colours of Blue and Orange.

This colour scheme is sooo zeitgheist that the last time I was in mothercare looking at car-seats, I even spotted a LeMans Gulf-strip baby seat complete with ‘fireproof’ four-point harness. In any case it’s surprisingly hard to find a picture either from Sebring or LeMans with the horseshoes on the rear wing. The definitely exist, see below:-) 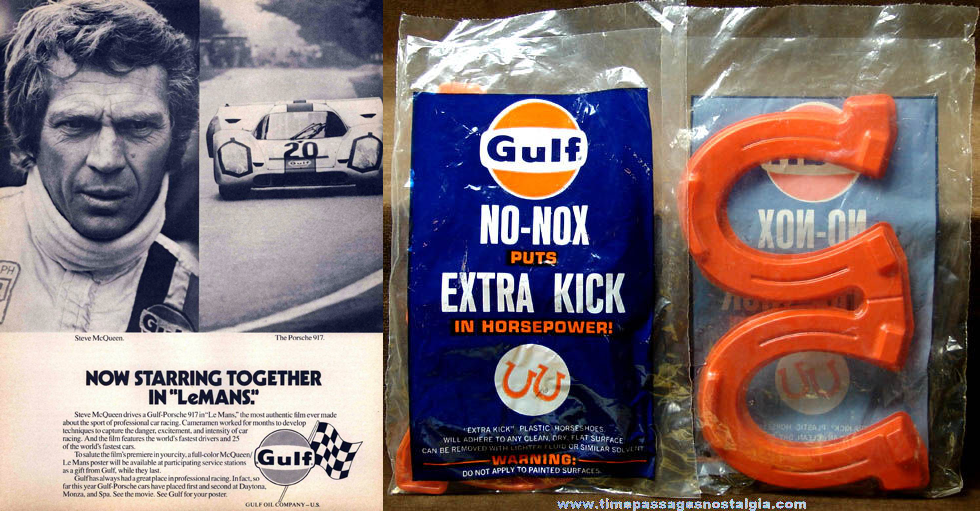 When you are directing films of races like that with six (count ‘em 6!!) cameras with all their attendant crews, you would think you’ve gotta lotta help. No. Not so. Gulf had an old ad idea we were supposed to give new life to – a pair of Orange horse’s hooves on the hind quarters of the car promised “extra kick” (I didn’t write the stuff, I just directed!).

The race is about to start… I have all my cameras poised and positioned to shoot the bloody horse shoe logo… and, down in the pits what do I see? You guessed it. No bloody logo! So me, Mr. Director, starts screaming and finding a spare set , go running through the track marshals and - Yes! - stick the bloody things on!! As they hustle me away - the Race begins!

I still have one great photo blow up of the car in a high speed turn, belching fire, and proudly showing two orange hoof prints stuck on its backside. End of story.