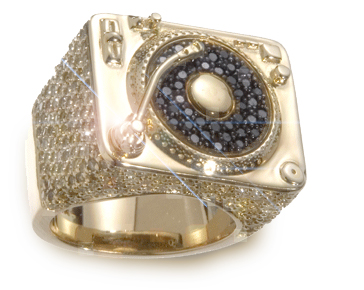 Awesome mathematically-named jewelry. You know, I haven’t used the lens-flare filter in photoshop in almost ten years but I thought in this instance I’d treat myself;-) Mathematics is linked to from the San Fran streetwars site, btw.

And speaking of streetwars I’ve just noticed (sorry–rambling a bit here–bear with me…) a post on digitalcatharsis expressing concern about the Streetwars event currently underway in London. He makes some good points about the likely interaction between the transport system, the security forces and a bunch of sandal-wearing geeks armed with water pistols. His point is of course we’re looking at another Menezes killing and in many ways I agree.

On the other hand, I think the game is incredibly liberating. I hate myself for not taking pictures of CU-1 in the bath. I love her, I think she’s beautiful and I want to have photographs of her in my family album but I don’t take the pictures (whether consciously or not) because of the whole pedophile thing. Increasingly, we are self-censoring and self-restricting. We’re reducing the richness and depth of our lives because of some sort of media-generated awareness. I think it’s fantastic San Francisco is filled with twenty-somethings dressed in black shooting each other with water pistols. It’s especially encouraging to see Americans, who totally over-reacted to being bombed reclaiming their freedom like this.

Until very recently, the UK has had quite a measured response to terrorist attacks on its own soil (beautifully exemplified by this policeman’s request for members of the public to move) but with crazy anti-terror legislation on the books it might be time for us to reclaim the streets too.